The Forest Red-tailed Black Cockatoo (FTRBC) has disappeared from approximately 30 per cent of its former range, and has suffered a significant decline in numbers in the past 60 years or so as a result of habitat loss and fragmentation, particularly in the jarrah (Eucalyptus marginata) and marri (Corymbia calophylla) forests (Johnstone et al. 2013). 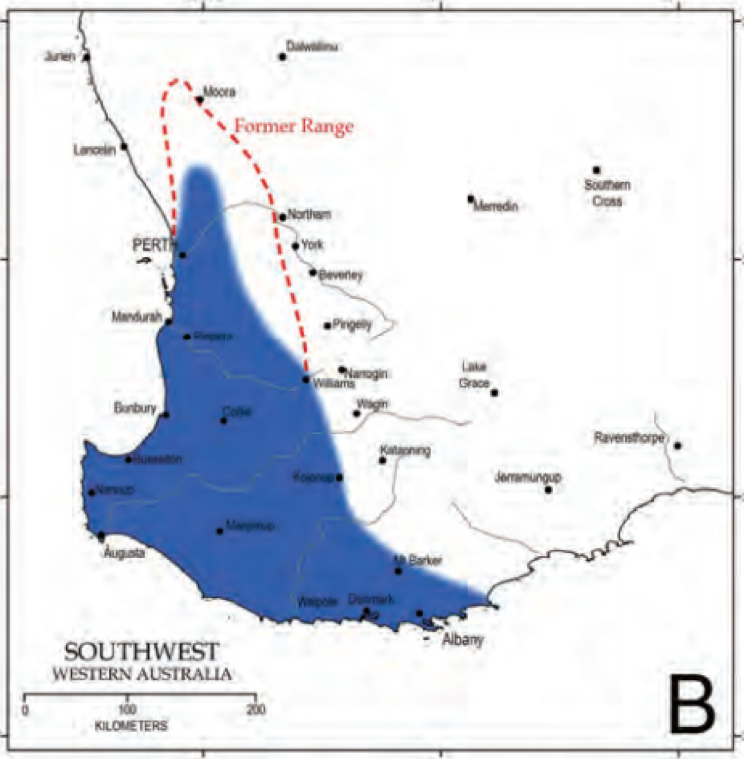 The jarrah, marri and karri forests are the primary habitat for the FRTBC, and the birds have a particularly strong association with marri trees, which provide their principal food source and nesting habitat. Johnstone et al. found in a 17-year study on FRTBC breeding biology that there is a heavy reliance on marri trees over 209 years old for breeding (Johnstone et al. 2013). They are also known to nest in large hollows of jarrah and karri trees (Johnstone and Kirkby 1999).

Impacts of logging on the Forest Red-tailed Black Cockatoo

Logging in the south-west, particularly clear-felling of mature karri forests, destroys vital nesting hollows that only develop in very old trees. Nesting hollows are already scarce in the landscape as a result of clear-felling and clearing for agriculture and mining and there is broad consensus that habitat loss, particularly nesting habitat loss, is a major ongoing cause of decline (DEC 2008, CALM 2004, TSSC 2008).

Evidence collected by the WA Forest Alliance in 2015 shows that nesting hollows are still being destroyed in logging operations and marri trees up to 430 years old continue to be felled and left to rot or burn. FPC advice to the WA Forest Alliance in 2015 confirmed that very old trees, even with obvious nesting hollows, are still routinely cut down in karri clear-felling operations.

“We hope this study will provide a wake-up call to individuals, institutions and governments that we are facing a major crisis in southern forests and we require solutions to mitigate further destruction and loss of biodiversity.” Johnstone et al. 2013.

Red-tails are the spirit bird of the south-west. They hold profound spiritual significance for Noongar people and feature strongly in the Dreaming.